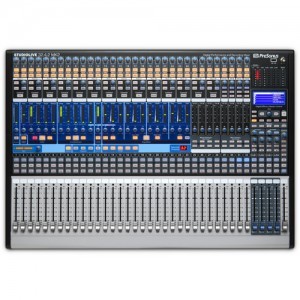 PreSonus’s latest technology, Active Integration, runs on an advanced built-in computer system, helping each stage of your signal chain work together. Each channel’s signal chain begins with a gain knob, an on/off Phantom power button and an optional recording buss send. From there, you can route the channel to each of the 14 aux busses pre- or post fader. Then your signal enters the virtual “Fat” channel strip, where you can perfect it with a polarity switch, high-pass filter, gate (frequency-controlled option), compressor, limiter and 4-band parametric equalizer-not to mention that at the press of a button, you can A/B your channel settings with the flat signal or another group of settings. You can then pan, assign to subgroups and manipulate the fader. This functionality can be applied to all 32 channels.

The StudioLive mixer has a separate digital 31-band graphic EQ available on each of the 14 Aux busses andone for the main outputs, allowing you to custom-tailor each monitor mix to the needs of the player, as well as perfect the mains to suit the room.

The StudioLive 32.4.2 has a few additional connectivity features. An extra XMAX preamplifier provides a talkback mic input, which can be routed to any buss. There are analog RCA tape inputs and outputs, control room outputs, a S/PDIF output and both XLR and TRS main outputs. Additionally, the StudioLive has 4 DB25 outputs, providing individual pre-insert balanced direct outputs for all 32 inputs.

Wired and Wireless Control
The StudioLive 32.4.2AI features an Ethernet port that allows connection to a wireless router for wired Ethernet and wireless Wi-Fi networking. In addition, the mixer has a USB 2.0 port for the included USB Wi-Fi LAN adapter, providing wireless networking without a router for situations where a less powerful, ad hoc Wi-Fi connection is sufficient.Written exclusively for StudioLive  mixers, Virtual StudioLive provides a complete visual representation of the mixer, allowing you to control the features with a mouse, trackpad, or trackball on a networked Mac or PC.