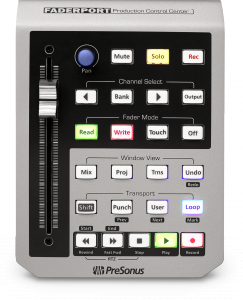 As great as DAWs are, it’s a drag to control the transport and create fades and automation with a mouse. Mostmusicians prefer a real fader and transport controls that they can touch.That’s why we created the FaderPort, which connects to your computer via USB and delivers complete transport controls for fast and efficient recording, along with a high-quality, touch-sensitive, motorized fader for writing fades and automation.

Feel is crucial when you’re spending countless hours recording and mixing. So the ultra-affordable FaderPort features the same high-quality, touch-sensitive, long-throw, motorized Alps fader that is found in expensive control surfaces anddigital mixing consoles. With its 1,024-step resolution and dual-servo drive-belt motor, the response will be smooth and seamless.

Compatible with virtually all major DAW programs, the FaderPort enables you to record perfect fades and write single-channel or grouped-channel volume, mute, and pan automation in real-time.

Control your DAW’s Solo, Record-enable, window selection, Play, Stop, and Record functions. Manage markers andpunch in and out with a footswitch (not included). The FaderPort makes it fast and easy.

You can even create your own custom key mappings. And if you use PreSonus’ Studio One DAW software, your FaderPort will be automatically recognized and can be used to tweak virtually any plug-in parameter.

So put down that mouse and get back in touch with your music. Get the PreSonus FaderPort.

Below are the minimum computer-system requirements for the FaderPort:

PreSonus FaderPort has been tested and approved to work with the following software:

(Functionality varies slightly, depending on the DAW.)