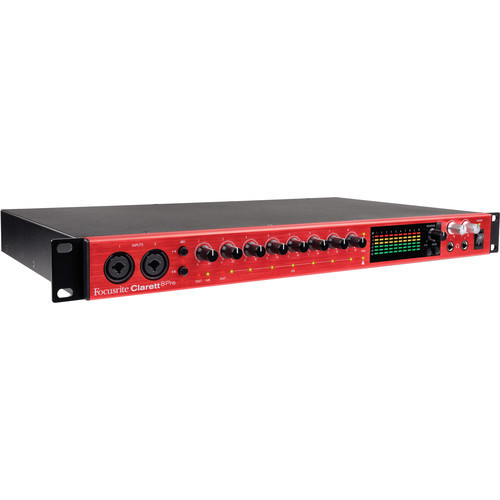 In addition to the Red 2 and Red 3 Plug-in Suite, the interface includes the Softube Time and Tone Pack. Modeled after the Drawmer 1973 FET Stereo compressor hardware, the Drawmer S73 Intelligent Master Processor is a plug-in that aids in balancing and shaping a mix. TSAR-1R Reverb adds space, depth, and width to a sound. Change settings with a single slider, from realistic three-dimensional rooms to dramatic and dreamlike halls. Tube Delay is an echo effect that can go from clean to rude by overdriving its three modeled tube stages - delivering everything from realistic room echoes, to rockabilly style slap back, to dub reggae echo. Saturation Knob is a modeled output distortion unit that adds grit and warmth - use it to fatten up bass lines, add some harmonics and shimmer to vocals, or simply destroy a drum loop.

Use DAW Plug-ins in Real Time
Thunderbolt connectivity provides a round trip latency of 1 ms which enables you to monitor through your DAW with your favorite plug-ins such as EQ, reverb, or compression

I/O
Provides 18 audio inputs and 20 outputs within a 1U rack space, including eight analog inputs, 10 analog outputs, stereo S/PDIF I/O and eight channels of ADAT I/O. The ADAT ports are ideal for sending audio to an external D/A for line output expansion, or adding eight channels of digital mic pre